There will be a special screening of John Frum He Will Come on Wednesday, August 5th at 7:30 PM to benefit the Vanuatu Cyclone Relief Effort. Screening will be held in Beverly Hills at  Laemmle’s Music Hall 3

Contributions are also being accepted for the Vanuatu Cyclone Relief Effort.
A $25 donation comes with A link to the feature length film, “John Frum, He Will Come,” will be emailed once the movie is completed and prior to its release.
A $75 donation includes A DVD of the feature length documentary, “John Frum, He Will Come,” will be mailed to you upon completion.
Donations in any amount are welcome and very appreciated.
Click here to donate 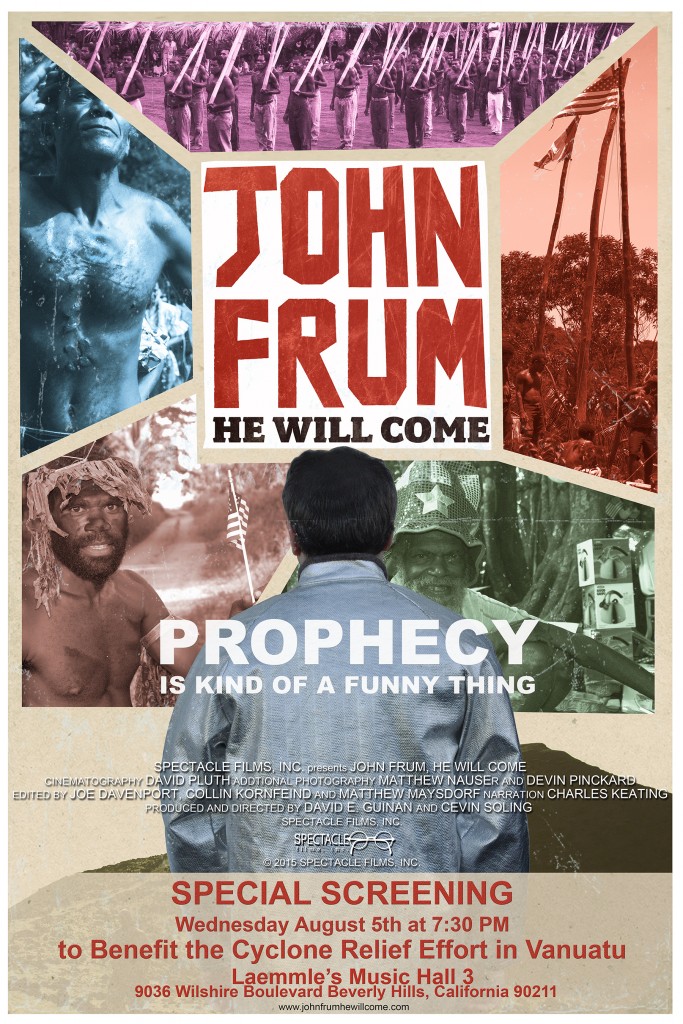 I have spent 8 years working on documentary film on the John Frum Movement on the island of Tanna in Vanuatu and have become close friends with many of the people.

The people of the tribe have attracted great interest from anthropologists, journalists, and tourists and have been referred to as being a “cargo cult.” What this means, in practice, is that they have successfully managed to defend many of their traditions and customs despite efforts of colonialists to force them to submit to missionaries. The practices involve weekly singing on Friday nights, drinking kava, and ceremonial dance. They also show their appreciation for the United States for protecting Vanuatu (then the New Hebrides) during World War II and for their efforts at helping protect their native customs. The people raise the American flag everyday and host a big celebration every February 15th – the anniversary of the day America helped free leaders of the John Frum Movement.

The destruction from Cyclone Pam – a category 5 cyclone has been devastating to the islands of Vanuatu.

Assistance for Vanuatu has been coming in from the US, Australia, France, Germany, and other countries, but Sawia, a John Frum village representative, has stated that much more is needed. Reporting from the disaster committee at Isangel Provincial headquarters, which receives and monitors the disaster relief items, Sawia announced that there are only enough resources for 15 days and more assistance is needed.

Contributions in any amount are appreciated.

Tanna is a tiny island located in the South Pacific island chain of Vanuatu formerly known as the New Hebrides. In the early 1900s, the island was governed by both the British and French as the locale was too remote for them to bother fighting over. Instead, they enacted an oppressive regime and sent missionaries who brutalized the natives and burned down their villages in an effort to force them to convert to Christianity and abandon their traditional customs.

During World War II, Americans arrived for the first time in Vanuatu and impressed the natives with their advanced technology, generous gifts, and warm regard. Instead of dominating or forcing religious ideologies upon them, American soldiers treated the Tannese with dignity and respect, and donated medical supplies, food, clothes, and other necessities. In addition, the Tannese were amazed to see black officers among the ranks.

America became their beacon of hope against the European occupiers and a resistance movement that had begun before the war assumed religious dimensions that now included America. A mysterious figure named John Frum emerged who embodied these sentiments. After the war, the United States left and the John Frum spirit also departed although not before he delivered a set of prophecies including the promise that he would return to Tanna with an abundance of American goods and lead them to salvation and sweep away the Christian missionaries. Believers were thrown into prison by the British and French for blasphemy until they were granted religious freedom in 1957. The John Frum followers patiently wait for their American savior to return.

Upon discovering the existence of the John Frum Movement, Cevin Soling, a Harvard graduate student and filmmaker, traveled to Tanna with an abundance of American goods in the hopes of fulfilling the John Frum prophecy. “John Frum, He Will Come” chronicles his ascension to island god.